One of the challenges of the new viticulture, is to produce grapes of the highest quality, but also to achieve higher levels of diversity, differentiation and typicity.

Rioja’s viticulture, with an ancient tradition, has a remarkable genetic heritage that is being recovered. Specifically, the Maturana Blanca variety, one of the oldest known varieties in La Rioja. Oenologically, it stands out for its low pH and high acidity, presenting very good organoleptic evaluation. However, although it is a vigorous variety and, despite its high fertility, it has the disadvantage of low production due to the small size of its clusters. These factors have led to a significant reduction in its cultivation in the Rioja region.

In this study we have seen how a vertical cordon conduction system (VC), which allows to increase the number of buds and, therefore, the number of productive shoots, compared to a head-trained system (goblet), supposes an increase in yield of up to 83%, thus achieving greater economic viability.

In addition, a notable reduction in berry size and better bunch exposure on VC vines compared to goblet vines resulted in a higher concentration of aromatic compounds. In conclusion, this study indicates that the VC in the Maturana Blanca variety improves the source-sink relationship. This supposes the optimization of the leaf/fruit area ratio, and, therefore, an increase in the concentration of aromatic compounds. These data serve as a basis to add value to the cv. Maturana Blanca and favors its use by viticulturists and wineries within the Rioja Qualified Denomination. 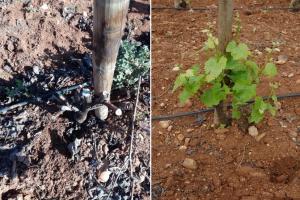 Genome sequence of Phyllosticta ampelicida, the cause of grapevine black rot
16/08/22

Sara Ferrero del Teso has completed an international Ph. D on the mouthfeel perception of red wines and its chemical drivers
23/06/22